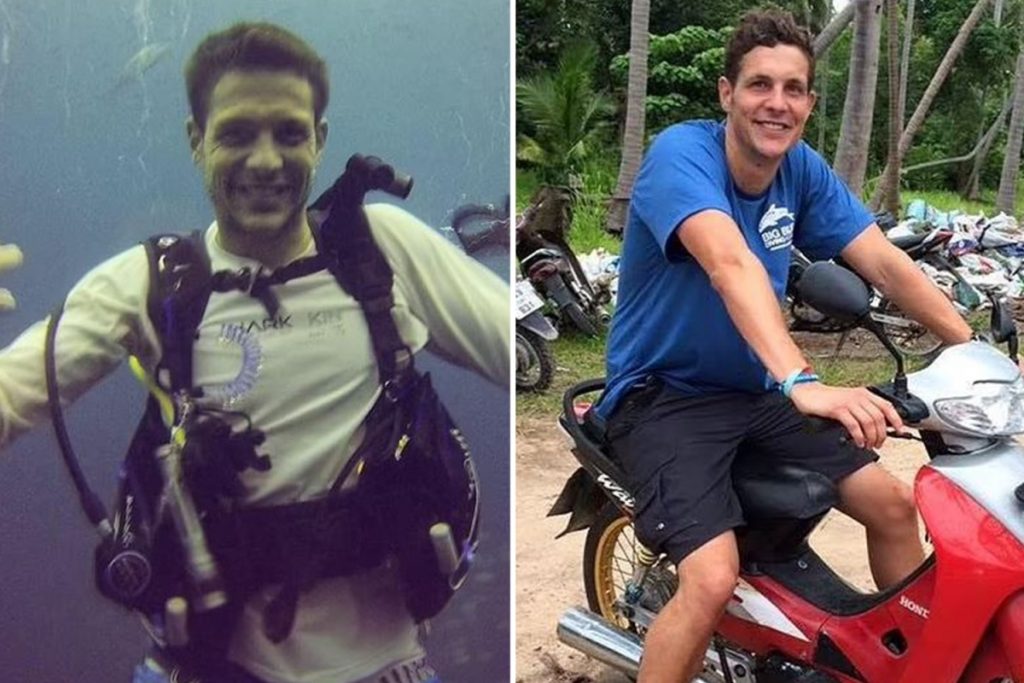 A BRIT diving instructor was mauled to death by a 15ft great white shark just days before safety lines were due to be installed.

Australian authorities said one was set to be placed in the area where Simon Nellist was attacked in just two weeks time.

Simon was due to marry girlfriend Jessie Ho[/caption] 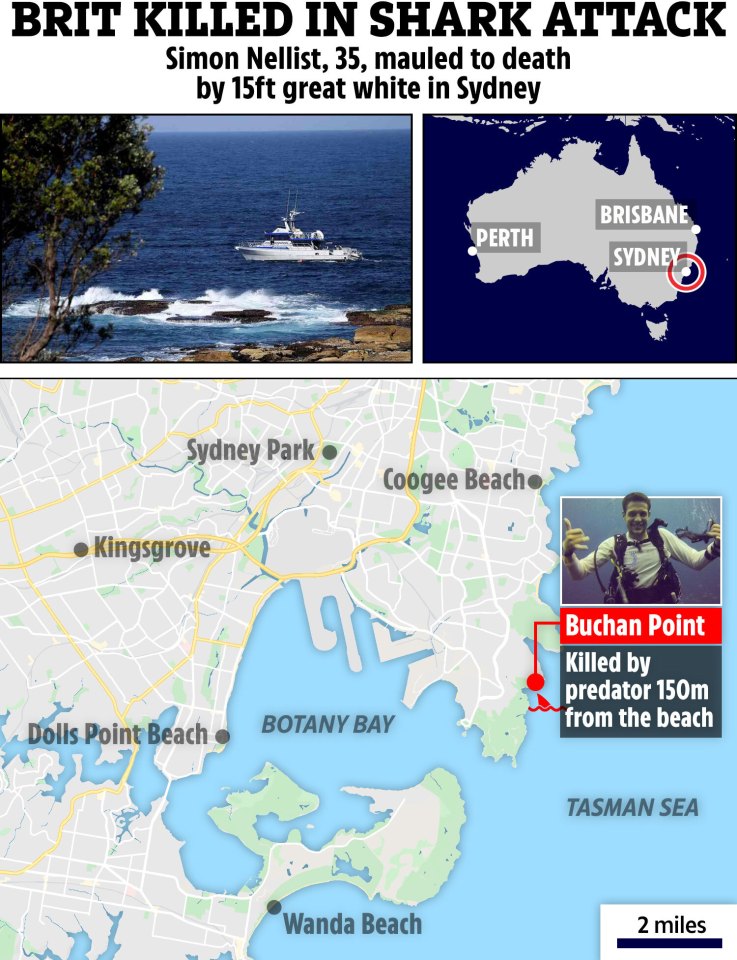 Simon, 35, was killed by the predator just 150m away from the beach at Buchan Point, near Little Bay in Sydney, in the first fatal attack in nearly 60 years.

The 6ft 5in British expat’s remains were found in the water on Wednesday afternoon following the horror ordeal.

Dr Paul Butcher, a senior government scientist, said marine officials were set to install a “smart drumline” that detects and traps sharks before they can enter popular swimming spots.

But it turns Little Bay Beach was just a handful of beaches not yet netted but were scheduled to be under a new government programme.

“We’re rolling SMART drum lines out in the Sydney region, around where this incident happened, in about two weeks,” Dr Butcher said.

He said had the shark involved in Wednesday’s attack been caught in the nets then “a decision (will) have to be made” as to whether it lived or it died.

Dr Butcher said it was unlikely they’d now catch the predator that could be as far as “100 kilometres” (62miles) away.

He said authorities’ biggest priority now was “getting those drumlines in the water straight away”.

Simon, who is said to be an experienced ocean swimmer and diver, is thought to have family in the UK.

He was also due to marry girlfriend Jessie Ho, described as the “girl of his dreams”.

Witnesses said they heard the victim yell out for help in desperation as the shark pounced just after 4.30pm on Wednesday.

What we know so far….

The great white allegedly “attacked vertically” before dragging the man’s body out of the ocean.

Expert Lawrence Chlebeck said that the ferocious shark probably mistook the swimmer – reportedly wearing a wetsuit – for a seal when it launched and attacked the Brit.

The 35-year-old was a regular swimmer in the bay where the frenzy occurred, according to local MP Michael Daley.

“The news hit us like a truck because he was one of the people who make this earth lighter.

“He loved the water, he loved diving.”

‘THERE WAS BLOOD EVERYWHERE;

The attack comes just three months after another Brit Paul Millachip was attacked and killed off the coast of Western Australia.

The 57-year-old was dragged underwater by a 14ft great white when he was killed in front of his horrified family.

Simon was a lover of the ocean spoke out against shark nets and drum lines, which he said indiscriminately “all kinds of marine life every year”.

Fisherman Kris Linto told Nine News: “Some guy was swimming and a shark came and attacked him vertically.

“We heard a yell and turned around it looked like a car had landed in the water, a big splash then the shark was chomping at the body and there was blood everywhere.

“It was really bad.”

One man described how he was fishing and saw a man wearing a wetsuit swimming across the bay.

He said the swimmer was right in front of him when he was dragged under the water by the shark.

The man told ABC: “He was yelling at first, and then when he went down there were so many splashes.

The shaken man said the attack lasted for several seconds.

He said: “It was terrible. I am shaking. I keep vomiting. It’s very, very upsetting.

“He just went down for a swim, enjoying the day, but that shark took his life.”

Rescue crews on jet skis and boats frantically hunted for the swimmer before human remains were found in the water and, according to reports, parts of a wetsuit were also recovered.

Shocked witnesses claimed the swimmer was attacked by a 15ft great white.

He said: “It’s very unusual to see a shark attack a human like that.

“The vast majority of shark bites are a ‘one and done’ occurrence. This is a very unique, and unfortunately tragic, situation.”

Simon was described as a calm and patient certified instructor who told students to respect the ocean.

He helped in diving rescue scenarios with scuba diving school Scubathlon, which is run by Della Ross.

At the time he was attacked, he was training for the Malabar Magic Ocean Swim – which was due to be held on Sunday but has since been cancelled.

The event director Robert Lloyd said: “The organising committee extends our thoughts and prayers to the family of the swimmer who was so tragically taken yesterday.

“Out of respect for the swimmer and his family, and following wide consultation with Randwick Council and experienced senior Surf Life Saving personnel, we believe that cancelling the 2022 swim is appropriate.”

A stretch of beaches have now been shut to the public as the first fatal shark attack in the Sydney area since 1963 sparked panic among locals.

A distressing video of the violent ambush showed the shark thrashing around in the bloodied water just metres from the rocks.

And a fisherman can be heard shouting: “Someone just got eaten by a shark. Oh man! Oh no! That’s insane. That’s a great white shark.

“I just saw a four to five metre great white explode on the surface right here on a swimmer and it was like a car landing in the water.

“F*** man, I heard a scream and the shark was just chomping on his body and the body was in half here just off the rocks.

“It came back and swallowed parts of his body and that was it.”

Local resident James, 27, arrived at the beach shortly before 5.30pm when helicopters were circling above the cliffs, but people were still swimming.

It was terrible. I am shaking. I keep vomiting. It’s very, very upsetting.


Man who saw Simon attacked in the water

He told the Guardian Australia: “Everyone was looking around, trying to work out what was going on.

“There were still people in the water. I’m never getting in again – no way.”

A NSW Ambulance spokeswoman: “Unfortunately this patient had suffered catastrophic injuries and there was nothing paramedics could do.”

The tragic death is the first deadly shark attack in Sydney since 1963 when Marcia Hathaway, a well-known local actress, was fatally mauled by a shark in Middle Harbour.

The shark pounced while she was standing in murky water only 20 feet from the shore in the northern arm of Sugarloaf Bay, Sydney Morning Herald reports.

Randwick Mayor Dylan Parker said the community was in shock.

He said: “The coast is our community’s backyard. Little Bay is normally such a calm, beautiful place, enjoyed by families.

“To lose someone to a shark like this is chilling. We are all in shock.”

The MP for the state electorate of Maroubra, Michael Daley, went to the scene on Wednesday evening.

He said: “The community is just shocked by this horrific incident.

“Our thoughts go out to the family involved. This is a beautiful community. The coast is our life around here.”

The beaches from Clovelly to Botany Bay have been closed and will remain shut on Thursday.

Cops will resume the search with divers at sunrise on Thursday.