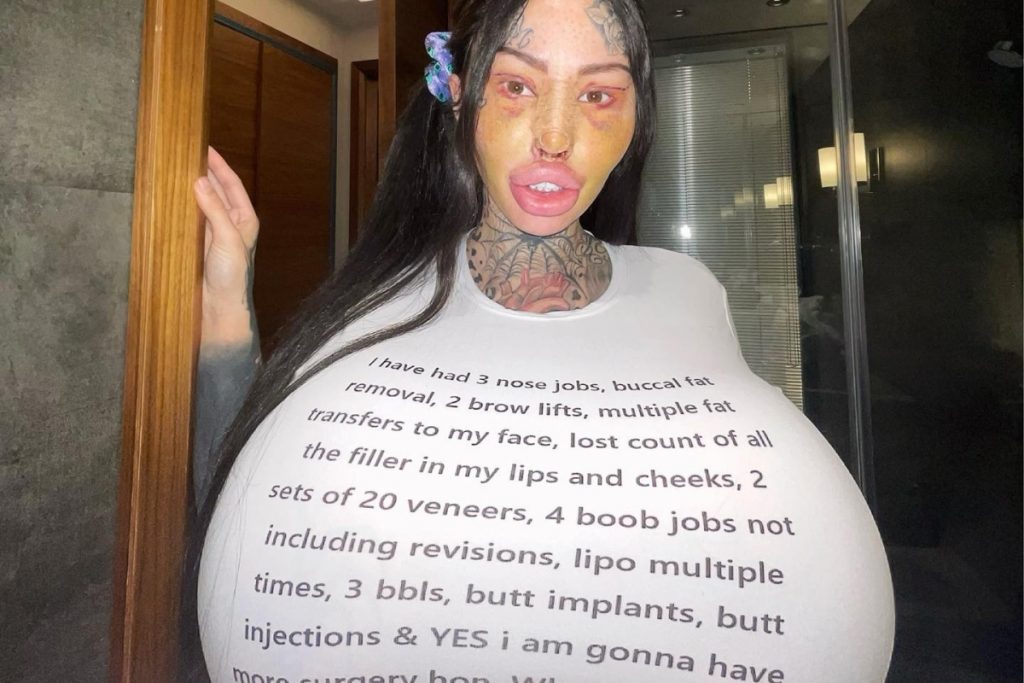 The 26-year-old social media star recently shared her latest Barbie nose and cat eyes look as a result of her latest cosmetic operation.

But in a recent post she shared dramatic images of what she used to look like when she was working as an exotic dancer.

The plastic surgery looks completely different with a toned down set of tattoos and noticeably thinner lips.

In some of the pics she even wore braces to straighten her teeth, which she would later replace with veneers.

Another photo shows a fresh-faced Mary with short blonde hair giving a thumbs-up to the camera after baking a loaf of bread.

“During one of my lesbian phases, one of my hobbies was baking bread,” she captioned the image.

“I would literally spend all day baking stuff from scratch and jumping rope.

“I have no idea how to cook or bake now but I want to get back into baking. I remember I thought it was so much fun.”

Mary has since undergone countless plastic surgery and spent a whopping £75,000 in the process.

Following her latest procedure she uploaded a photo of herself with her face swollen and bandaged on Instagram.

“My top lip is still not f***ing moving at all from the surgery!” she said in a short clip.

“It’s still swollen from the nose surgery, so even talking is weird.”

But despite suffering visible discomfort, she boasted “it looks perfect”.

“It’s a very fake-looking Barbie nose which is exactly what I asked for, and so many surgeons said it was not possible for me to have this type of nose because of my three prior nose jobs.”

She reportedly flew to Russia for the latest surgeries because she was unable to get the extreme operations done in the United States.

And she revealed there is still more surgery to come.

“Next week I have my eyebrow transplant, jaw and lips booked then my face will be complete,’ she captioned the photo,” she said.

Mary last year revealed how she almost died during a procedure on her vagina.

“The most unusual operation I had was very recently, on my vagina” she revealed.

“I custom designed it, so I have the fattest in the world. I almost died during [the] procedure. I had to get two blood transfusions.

“The doctor said I was losing so much blood, and turning very pale. He thought I was going to die.”

Asked about her first surgery, she said: “It was a boob job. I was working as a stripper since I was 17, and I’ve always loved the fake bimbo look.”

And while she is proud of her striking appearance, she admits that some of the attention she gets is not always positive.

“People judge the hell out of you. They decide you’re a bad person. They can be really mean.”

Mary said she nearly died after surgery on her vagina[/caption]