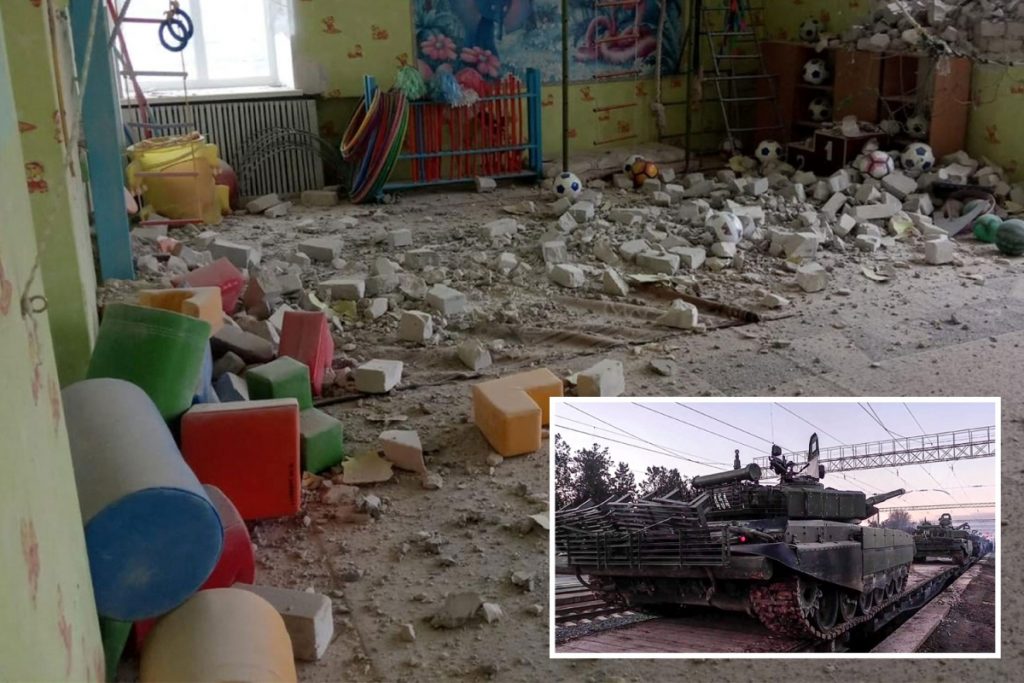 THE bombing of a Ukrainian nursery was a false flag attack by pro-Russian forced in a bid to trigger an invasion, Prime Minister Boris Johnson has said.

The UK leader said the attack on a kindergarten in Ukraine was a “false flag operation designed to discredit the Ukrainians,” and feared these types of strikes would escalate over the next few days.

Two teachers were reportedly injured in the blast[/caption]

Speaking about the latest developments during a visit to RAF Waddington in Lincolnshire, the Prime Minister said: “I wish I could give everybody better news about this, but I have to tell you that the picture is continuing to be very grim.

“Today, as I’m sure you’ve already picked up, a kindergarten was shelled in what we are taking to be – well, we know – was a false flag operation designed to discredit the Ukrainians, designed to create a pretext, a spurious provocation for Russian action.

“We fear very much that that is the kind of thing we will see more of over the next few days.”

The Prime Minister said he was working to “do everything to strengthen the package of sanctions” against Russia should it invade Ukraine, including “tough” penalties for Russian companies raising money on the UK’s financial markets.

Pictures circulated on social media showed what appeared to be a shell hole through the wall of a yellow-painted nursery classroom in strife-torn Luhansk, eastern Ukraine.

The blast appeared to have scattered masonry around children’s toys and footballs in the room close to a cot and a kiddie’s climbing ladder.

Tots escaped injury but two teachers were reported to have suffered cuts and bruises in the blast on the “contact line” between the forces in the village of Stanytsia Luhanska.

Reports of shelling flooded in during the course of the morning across Luhansk.

Unverified pictures showed a secondary school apparently hit in Vrubivka on the Ukrainian side of the frontline.

A shell-hole was seen in the playground after a blast was said to have erupted as 30 students and 14 staff members were in the school.

A Popasna City Military-Civil Administration spokesman said: “Today at about 10:25 am a shelling took place from the temporarily occupied territory in the village of Vrubivka.

“As of 11:10 eight students and two staff members are in the basement of the lyceum, the rest of the children were taken away by their parents.

Pro-Russian forces quickly hit back with a counterclaim that the Ukrainians stage-managed the incident – which was denied by military chiefs in Kyiv.

Emotive imagery from the incident fired up fury on both sides – playing into the hands of Vladimir Putin who is feared to be seeking an excuse to send in his 150,000-strong invasion force.

A train station in Stanytsia was also reported to have been hit.

Meanwhile, smoke was seen billowing from the Russian Embassy in Kyiv early yesterday.

The building was not under attack – but the scene fired speculation that staff inside were burning sensitive documents.

Russia said earlier this week that its embassy was staying put in Kyiv while several western consulates moved west to Lviv as war fears rose.

Putin’s staff in Kyiv were believed to be destroying papers to avoid them falling into Ukrainian if Russia invades.

A shelling duel was underway as the shaky ceasefire along an entrenched 250-mile frontline in seized Donbas began falling apart.

Pictures of the nursery shared by the Humanitarian Mission Podsnezhnik, backed by the UN, could not be fully verified.

Pro-Russians pointed to undamaged balls being visible on the floor, and nearby windows being intact, despite the force of the blast which holed the thick brick walls.

But a Ukrainian official – branding their enemies “terrorists” said: A report from the Ukrainian said: “With special cynicism, Russian occupation forces attacked the village of Stanytsia Luhanska.

“As a result, of the use by terrorists of heavy artillery shells got into kindergarten. According to the first reports, two civilians suffered contusions.

“The communal infrastructure was also damaged – half of the settlement was left without electricity.

Ukrainian military sources said yesterday that Russian separatists fired at least 32 122mm mortars into their territory, including the ones which hit the kindergarten and school.

The barrage was at its most intense between 8am and 9am but was continuing sporadically.

Ukraine said it had received incoming fire but had not fired back – but the separatists claimed Ukrainian fire had hit eight houses inside their area.

Alexander, a 35-year-old surgeon in Ukraine’s Marine Corps spoke to The Sun from a trench in Verkhnotoretske (ckd) on The Donbas frontline yesterday.

He said: “We have been under heavy shelling all morning from the pro-Russian forces in the east.

“We are not fighting back – all of our forces have been ordered not to return fire.

“All we can do is take cover. This is the most intense fire we have seen for months.”

Ukrainian Foreign Minister Dmytro Kuleba said later that Stanytsia Luhanska – where the nursery was hit –  had been shelled with “heavy weapons” from the eastern conflict zone.

Chaos and confusion was sown as the West warned about fake reports of attacks on pro-Russians in the Donbas could trigger conflict “at any time.”

Western intelligence suggests that such fabricated reports will be used to justify a Russian invasion of Ukraine.

The village of Stanytsia Luhanska is on the contact line between Ukrainian government and pro-Russian rebel forces, a settlement also known as Novaya Kondrashovka.

Russia was also building a claim that it has a “responsibility to protect” Donbas by military intervention claiming it had unearthed mass graves of “hundreds of civilians”.

Moscow is preparing to release gruesome new material on five reported burial sites of victims killed in “indiscriminate shelling by the Ukrainian armed forces” in 2014.

Smoke was spotted coming from the Russian Embassy in Kyiv[/caption]

Another 7000 soldiers were sent to the border[/caption]

Troops on drills in Belarus have built a new assault bridge close to Ukraine’s border.

Junior defence minister James Heappey said: “For all the talk of deescalation what we are seeing is the opposite.”

Earlier Britain’s military spy chief stepped out of the shadows to call out Russia’s false claims.

General Sir Jim Hockenhull, the head of defence intelligence, said Russian troops were still advancing despite repeated claims that tank units were returning to their barracks.

His rare public comments are part of a trans-Atlantic media blitz to counter Moscow’s propaganda lies.

The Army spy chief who has access to the latest signals, satellite and human intelligence said: “Contrary to their claims, Russia continues to build

“This includes sightings of additional armoured vehicles, helicopters and a field hospital moving towards Ukraine’s borders.”

“We have not seen evidence that Russia has withdrawn forces from Ukraine’s borders,” he added.

A fleet of 60 choppers swooped into Crimea this week where 40,000 Russian troops are based.

Another 30,000 Russian troops on exercise in Belarus are at “peak readiness” to invade, according to UK defence sources.

Hockenhull warned: “Russia has the military mass in place to conduct an invasion of Ukraine.”

Up to 5,000 Brits are still in Ukraine despite Foreign Office warnings to leave.

He said: “It is our duty and obligation… to support the people of Ukraine as long as there is no war or missiles flying there.”

Britain has opened a backup embassy in Lviv, close to the Polish border, but ambassador Melinda Simmons and core a group of staff are clinging on in Kyiv.

A source said Simmons was determined to stay in the capital until she was ordered to leave.