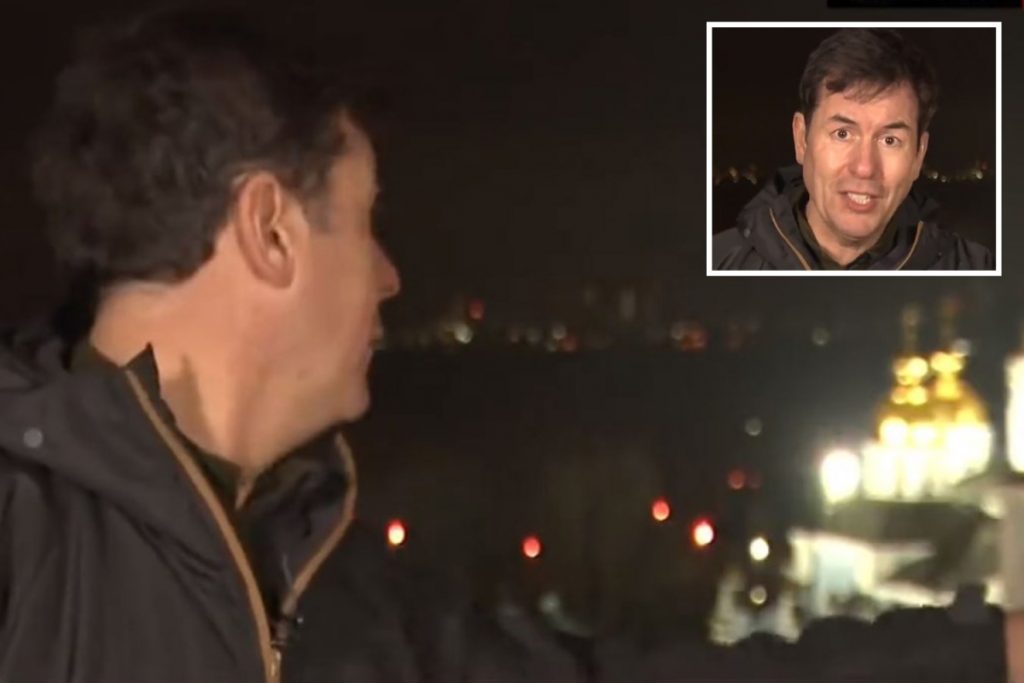 THIS is the moment a reporter ducks for cover live on TV as “big bangs” erupt throughout Kyiv.

The deafening crashes can be heard during a live news report broadcast on CNN this morning, as Russia declared war on Ukraine.

Vladimir Putin launched a “special military operation” in the Eastern European country in the early hours of this morning.

As the reality of war with Russia set in, airstrikes and artillery shells rained down, air raid sirens blared and desperate Ukrainians fled West for safety.

In harrowing footage from the roof of a central Kyiv hotel, Senior Foreign Correspondent for CNN Matthew Chance can be seen jumping out of his skin as blasts rock the city in the small hours of this morning.

It’s not clear what the sound is, and no smoke or fire can be seen following the explosions.

Feeding back to the studio he says: “Tell you what, I just heard a big bang right here behind me.”

He adds: “We probably shouldn’t have done the live shot here. There are big explosions taking place in Kyiv right now.”

A series of blasts can be heard in quick succession as the seasoned reporter, 52, searches the black skyline for signs of fire and smoke.

Matthew continues: “I can’t see where they’re taking place from this vantage point on top of the hotel, and I can’t explain what they are.”

The correspondent explains he heard “four or five” of the bangs but they are “quite distant” from his current location in the centre of the city.


Thundersnow to strike Britain – maps show if YOU will see any

He adds that it is a “remarkable coincidence” he is hearing the blasts just moments after US intelligence warned Ukraine’s capital could face airstrikes, missile and ground attacks.

The reporter then scrambles to put on his flak jacket – a type of armour used to protect the body from fragments of high explosive weaponry – as the bangs continue.

He ducks for cover beneath the balcony, pulling the armour from his backpack.

Matthew said it is the first time he has ever heard anything like that in his years of reporting from the region.

As the morning goes on, the world is waking up to what could the most horrific crisis since World War Two as Putin seeks to tear down the world order.

His seemingly full scale invasion of Ukraine is all part of his deluded plan to rebuild the Soviet Union and his paranoia over Nato.

Putin took to Russian airwaves at 5.50am Moscow time to order an aerial blitz in the first stage of his attack.

Russia had some 200,000 soldiers ready to move in – encircling the north, south and east of Ukraine.

Matthew’s broadcast takes place around 5.07am Ukraine time – just short of an hour before Putin officially declared his ill-sighted invasion.

Hundreds are already feared to have been killed in a conflict that has been warned to have a death toll potentially in the hundreds of thousands and that could displace MILLIONS into Europe.

Global leaders have condemned Putin and pledged to stand with Ukraine – with the world now just one false move from what could become World War Three.

Prime Minister Boris Johnson said Putin had “chosen a path of bloodshed and destruction”, while US President Joe Biden described the assault as an “unprovoked and unjustified attack”

Russia also launched a prong of its attack from neighbouring Belarus – where Putin has been shameless wooing its leader Alexander Lukashenko, a man known as “Europe’s last dictator”.

Ukranian military told The Sun this monring’s horror is “just the start,” adding: “We have intelligence that a bigger second wave is coming.

“This is more than our worst fears.”