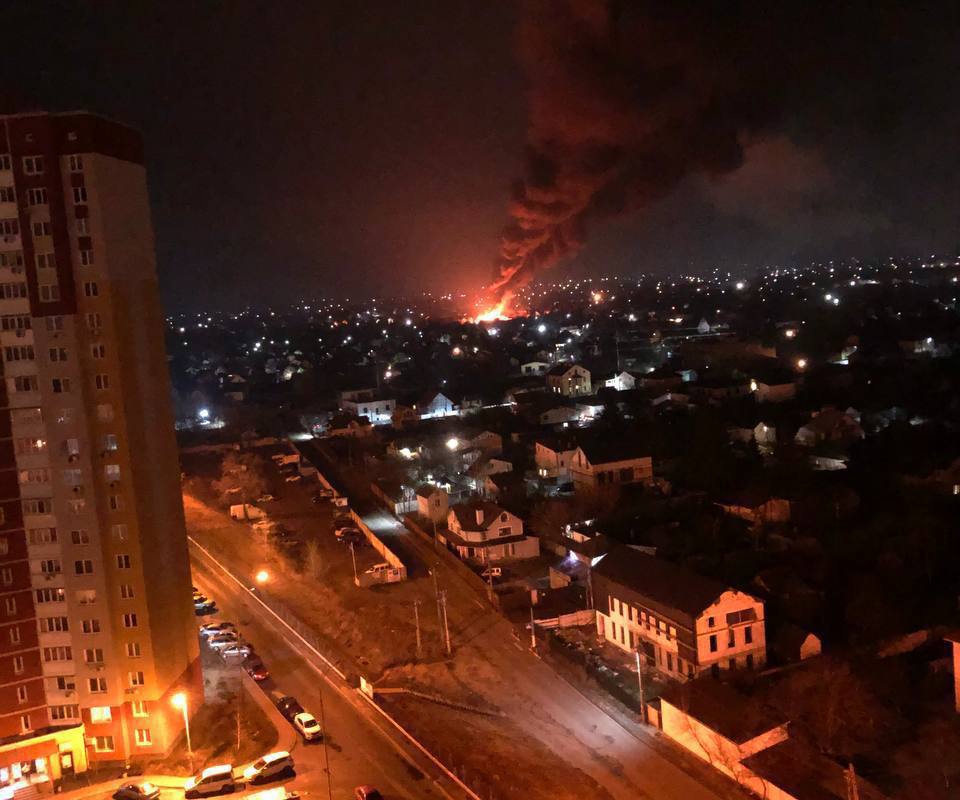 A WARPLANE has reportedly been shot down in a fireball over Kyiv as Vladimir Putin prepares to besiege the city of 2.9million people.

Explosions were heard overnight as its now reported that Moscow’s forces are just 20 miles from the capital after yesterday’s full scale invasion.

A Ukrainian fighter jet crashed down in southeastern Kyiv[/caption]

Ukrainians have been warned they now face their “hardest day” with an expected all out offensive by the Russians.

Some 10,000 guns have been handed out to residents in a bid to protect Kyiv.

At least 137 Ukrainians are already dead across the country at the hands of Putin’s forces.

Ukraine’s Interior Ministry claimed a Russian aircraft was shot down over the city amid the violent clashes.

“According to operative information, the enemy aircraft was shot down by the Ukrainian Air Defence Forces and crashed in Darnytskyi district,” adviser Anton Gerashchenko said.

He also shared a series of photos of a nine-storey block of flats on fire to his Telegram account.

“Attacks on Kyiv by cruise or ballistic missiles have just continued,” he wrote.

However, conflicting accounts claim the downed aircraft was a Ukrainian plane, shot down by a Russian surface-to-air missile.

Kyiv’s mayor Vitali Klitschko claimed three civilians had been injured in the blast, two of them seriously.

It was later confirmed at least eight people had been injured in two separate shellings.

Multiple reports claimed Russian forces were due to reach Kyiv by 3am local time (1am GMT).

The skies above the city were calm for a while but, just after 4.20am local time (2.20am GMT), loud blasts were heard.

US Senator Marco Rubio said at least “three dozen missiles” were fired at Kyiv in the space of 40 minutes.

Journalist Neil Hauer shared a video he claimed showed a Russian jet being shot down over Kyiv.

Eastern European news source Nexta posted a picture on Twitter showing the aftermath of wreckage falling on a residential area of the city.

Darnytskyi is a large district in the southeast of Kyiv, between the city centre and Boryspil International Airport.

The Guardian’s Luke Harding also shared a photo of the aftermath of an explosion in Kyiv.

He said that the last took place between Poznjaky and Kharkivska.

A Ukrainian jet, an SU-27, was shot down by a surface-to-air in a separate incident, the Ukrainian government said.

Ukrainian troops have also battled Russian tank units in Ivankiv, north of Kyiv, as they travel from the border with Belarus south, via the Chernobyl exclusion zone.

Separate air raid sirens have been heard in the major Ukrainian cities of Kharkiv, Chernihiv, and Odessa, sparking fears of a major coordinated onslaught on a number of population centres.

Attacks on Kyiv by cruise or ballistic missiles have just continued

Ukraine’s Foreign Minister Dmytro Kuleba described the attack as “horrific”, comparing it to an assault by the Nazis.

“Last time our capital experienced anything like this was in 1941 when it was attacked by Nazi Germany,” he said.

“Ukraine defeated that evil and will defeat this one. Stop Putin. Isolate Russia. Sever all ties. Kick Russia out of everywhere.”

It comes shortly after Ukrainian forces appeared to have secured a major victory with the successful recapture of Kyiv’s Antonov airport, 20 miles northwest of the city.

US officials say they fear the city will fall in the next four days and the government of President Voldymyr Zelenskyy will be toppled within a week.

President Zelenskyy earlier announced 137 people had died in the first day of fierce fighting as he vowed to stay in his country until the bitter end.

“It’s foul and will never be forgiven.”

He also accused the West of abandoning his country and leaving them to fight Vladimir Putin “alone”.

The night sky over Kyiv was illuminated by explosions[/caption]

US President Joe Biden is due to hold an emergency summit with other NATO member leaders at 9am Eastern (2pm GMT) to discuss the crisis.

That same day, a former senior US intelligence official told Newsweek: “After the air and artillery end and the ground war really starts, I think Kyiv falls in just a few days.

“The military may last slightly longer but this isn’t going to last long.”

A source close to the Ukrainian government said they agreed the capital would be surrounded within the next four days, but claimed the government would not collapse.

Some 10,000 assault rifles have been given to civilians in Kyiv in a bid to fight off the invaders, the Interior Ministry said.