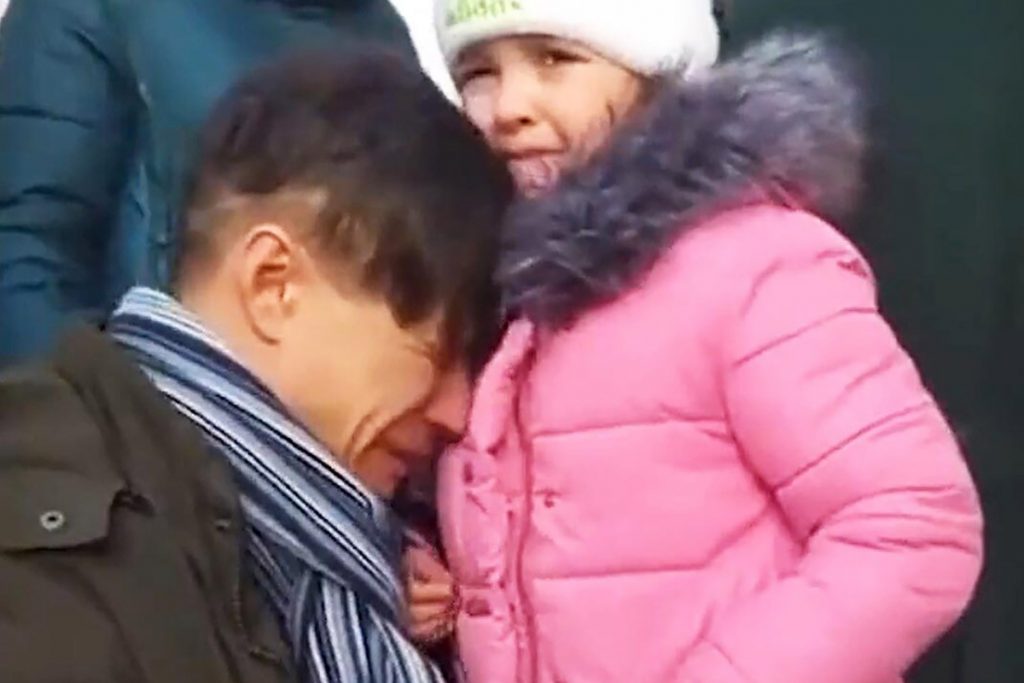 A BRAVE dad sobs as he says goodbye to his departing daughter and partner before staying to defend Ukraine from the Russians.

In the viral video, the Ukrainian adjusts his young girl’s woolly hat before she gets on a bus to safety.

He then crouches and buries his head into her pink coat as he breaks down in tears. The distraught man tenderly touches her window as the coach leaves.

It is not known where the video was filmed but, with Russian forces driving deeper in to Ukraine, cars jammed motorways and people crowded into railway stations to evacuate cities in huge numbers.

One witness said: “Families are being forced to take the agonising decision to split up. Women and children are heading to the safe zones while the men stay behind to fight to protect their homes.

“People didn’t really evacuate before the invasion as no one believed Putin would actually go through with it.

“But now they are finding whatever form of transport they can to get out — even going to neighbouring countries such as Moldova.”


Promising actor, 27, who starred in Corrie died after 'falling ill' on holiday


Missiles blitz cities across Ukraine with ‘hundreds’ of casualties

Meanwhile, schoolchildren in Donetsk were given extra training by soldiers on what to do if a bomb goes off.

Kids were sat on shelves in makeshift shelters with their knees pulled to their chests after being marched out of their classrooms.

With Russian forces driving deeper in to Ukraine, cars jammed motorways and people crowded into railway stations to evacuate cities in huge numbers[/caption]