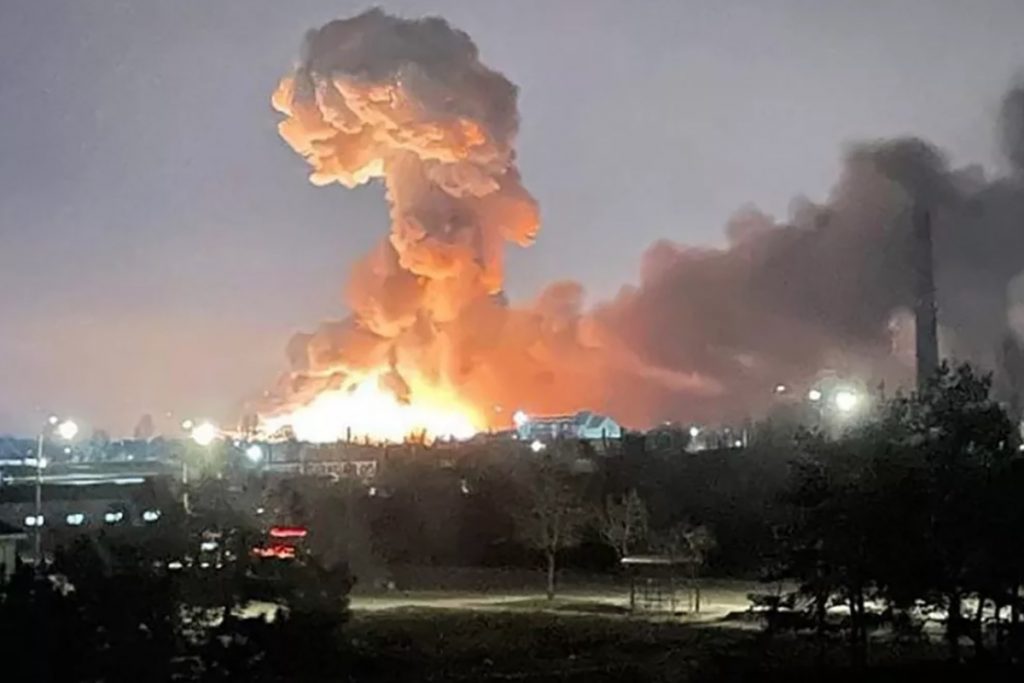 RUSSIAN tanks and troops are advancing on the city of Kyiv, with terrified citizens forced to take shelter in underground stations and basements.

Vladimir Putin’s tanks are less than 20 miles from Ukraine’s capital, as thousands try desperately to escape to the west and flee the onrushing army.

Russian forces have been advancing from the north, east, and south of Ukraine[/caption]

Kyiv is under curfew as the Russian onslaught approaches[/caption]

Workers at Chernobyl have reportedly been taken hostage[/caption]

The country’s President Volodymyr Zelenskyy said Russia had captured an airfield near Kyiv.

If the city falls, Western leaders fear large-scale civilian casualties in the city of 2.9m people.

The invasion on Thursday began with a series of Russian missile strikes followed by ground troops crossing the border.

Western officials also reported forces crossing over from Belarus, where a number of large-scale military exercises have taken place in recent days, as well as from the annexed territory of Crimea.

The West is worried that Russia intends to storm across Ukraine in a lightning-fast war, installing a pro-Moscow puppet regime in Kyiv.

President Zelenskyy said: “What we have heard today are not just missile blasts, fighting, and the rumble of aircraft.

“This is the sound of a new iron curtain, which has come down and is closing Russia off from the civilised world.

“Our national task is to make sure this curtain does not fall across our land.”

It comes as Russian troops captured the former nuclear power station of Chernobyl, taking cleanup workers at the site hostage.

An adviser to the Ukrainian President, Mykhailo Poldoliak, told reporters: “After a fierce battle, our control over the Chernobyl site was lost.

Slamming the “senseless” attack by Russian forces, he added: “It is impossible to say that Chernobyl is safe.”

The President’s Office warned that the move is “one of the most serious threats to Europe today,” as Russian troops may be preparing to provoke the nuclear power plant or “use the damage received during the attack to blame Ukraine, or damage these by far the most dangerous objects”.

Ukraine’s Foreign Ministry said the Russian attack “may cause another ecological disaster”.

This is the sound of a new iron curtain, which has come down and is closing Russia off from the civilised world

Chernobyl “can happen again in 2022” if the war continues, it said.

Following the news, US President Joe Biden made a TV address, accusing Putin of starting a war in Europe.

“Putin is the aggressor. Putin chose this war,” he said. “And now he and his country will bear the consequences.”

It comes as Vladimir Putin‘s troops simultaneously surged into Ukraine from the north, east, and south after a cruise missile blitz.

Chernobyl lies 80 miles north of Kyiv on a strategic route into the capital from Belarus, Putin’s puppet state where he has stationed 30,000 troops.

Soldiers were said to be fighting close to the giant sarcophagus sealing in the reactor that exploded in the world’s worst nuclear disaster in 1986.

Zelenskyy added the Russian assault on Chernobyl was “a declaration of war on all Europe”. 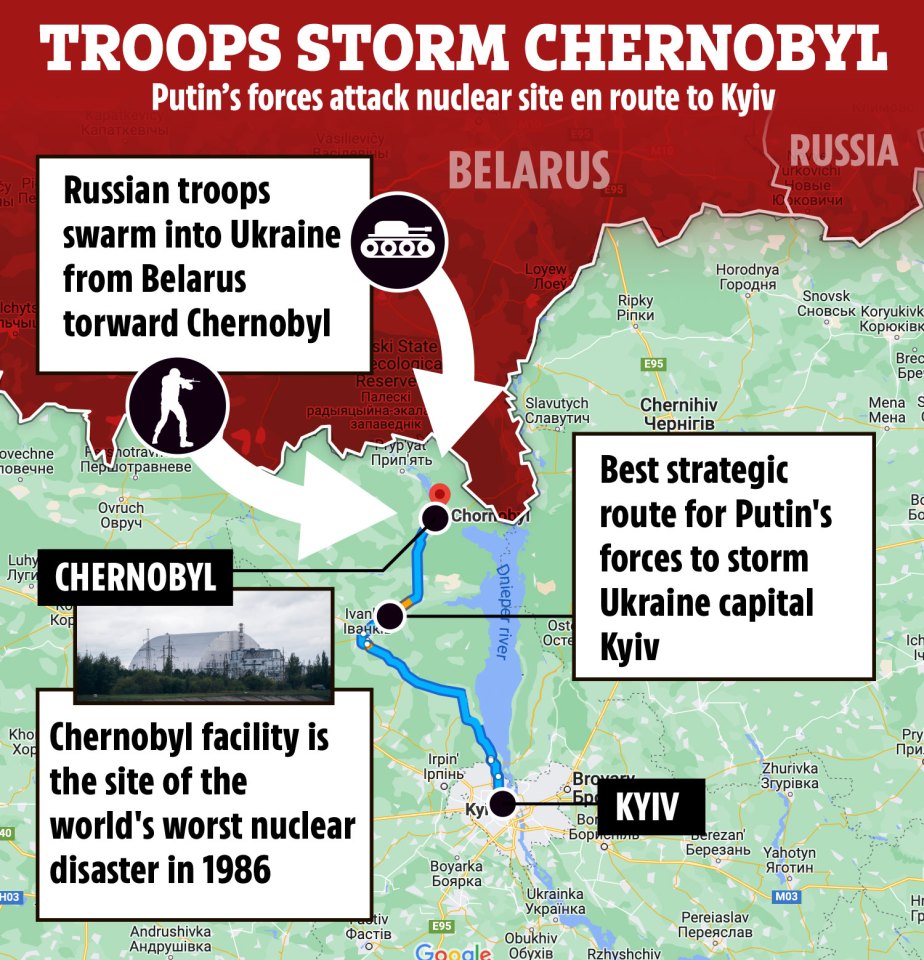 Anton Gerashchenko, an adviser to the Interior Minister, said the invading troops entered the exclusion zone from the Belarus side.

He added: “If the occupiers’ artillery strikes destroy the nuclear waste storage facility, radioactive dust could cover the territories of Ukraine, Belarus, and the EU.”

The April 1986 reactor explosion and fire killed at least 31 and spewed a huge cloud of radioactive particles into the air.

It blew across Europe and rained down over thousands of square miles.

The Chernobyl site is still protected by a large exclusion zone where people can only visit for short periods to avoid high doses of radiation.

Last month Ukraine sent reinforcements to the area over fears Chernobyl could be targeted by Putin.

The long-feared invasion came in the early hours today as missile blasts rocked Kyiv and 24 other cities.

A second wave followed hours later as dramatic video showed a swarm of Mi-8 and Ka-52 helicopters blitzing an airport close to the capital.

It was followed by a ground battle for control of the airfield.

And tonight it was claimed 18 Russian Il-76 transport planes had taken off from Russia bound for Kyiv.

It was feared they could be carrying paratroopers for a lightning assault to seize the capital.

US officials said Putin’s aim was to “decapitate” the democratic government and install a Kremlin stooge as president.

Tanks also rolled into the east from Russia and met fierce resistance from defence forces in Sumy near the strategic city of Kharkiv.

Meanwhile troops surged into the south from annexed Crimea, and planted a Russian flag on the Kakhovka hydroelectric plant.

Russia was reported to have gained control over much of the Kherson region in the south.

It said: “Russian forces based in Belarus are advancing towards Kyiv.

“The Ukrainian armed forces have put up a staunch resistance and continue to hold key cities.

“Heavy casualties have been suffered on both sides, although exact numbers are currently unclear.”

Across the country, dozens of civilians were killed including 22 in a village near Odessa, a boy in a block of flats in Kyiv, and four when a hospital was shelled in Donetsk province.

Elsewhere, fighter jets were seen flying low over Kyiv, and a Ukrainian An-26 plane was shot down killing five.

A Ukrainian plane with 14 onboard was shot down, killing five[/caption]

A huge blaze after a strike at Ochakiv port today[/caption]

Traffic in Kyiv as thousands fled air raids this morning[/caption]