THIRTEEN Ukrainian soldiers bravely told a Russian warship to “go f**k yourselves” before they were brutally massacred after refusing to surrender.

The defiant border guards had been tasked with protecting Snake Island in the Black Sea from Russian invaders after Moscow launched a full scale invasion of Ukraine.

Ukrainians have been warned they now face their ‘hardest day’[/caption]

Snake Island in the Black Sea is strategically located[/caption]

When the troops faced an ultimatum from the Russians to surrender and give up the strategic island, the guards fearlessly told them to “f**k off”.

In a radio message from the vessel, the Russian soldiers warned the guards: “This is Russian military warship.

“I suggest you lay down your weapons and surrender to avoid bloodshed and needless casualties. Otherwise, you will be bombed.”

But the Ukrainian troops defiantly refused to give up the territory, and replied: “Go f**k yourselves!”

The Russians were reportedly heard swearing back at the Ukrainians – before all 13 border guards were massacred in an aerial bombardment.

A chilling video revealed the final moments of the soldiers before they were killed in a hail of missiles from the Russian warship.

BLOOD ON HIS HANDS

A guard can be heard saying: “They try to scare us, or what? So far nothing is destroyed.

“I cannot understand what they’re doing, most likely trying to scare us. They strike the rocks.”

And Ukraine’s interior ministry confirmed Snake Island – which is also called Zmiinyi – had been attacked by Russian forces.

Snake Island is ruled by Ukraine, but it sits just miles from the coast of Romania.

The tiny island is strategically important as it will allow Russia to claim territorial waters stretching 12 nautical miles out to sea.

Russia would be able to cut off key shipping channels – isolating Ukraine from international markets and starving its economy of trade revenues.

Ukrainians have been warned they now face their “hardest day” with an expected all out offensive by the Russians.

At least 137 Ukrainians are already dead across the country at the hands of Putin’s forces after the assault began at 3.30am on Thursday.

But Ukrainians have remained defiant and put up a staunch resistance to the Russian invaders.

Some 10,000 guns have been handed out to residents and general mobilisation has been ordered in a bid to protect Kyiv.

Dawn is breaking over a city that faces an uncertain future as it comes under attack from air, land and sea by Russia.

US intelligence now fears Putin could topple the Kyiv in just 96 hours as Russian forces move within just 20 miles after seizing nearby Chernobyl.

Another day of bloodshed lies ahead for Ukraine – with all eyes now on the capital to see if Putin will be able to break through.

It is believed Russia want to take control of the city and install a compliant puppet regime.

After another night of battles across the country, Ukraine’s Interior Ministry claimed a Russian aircraft was shot down over Kyiv. 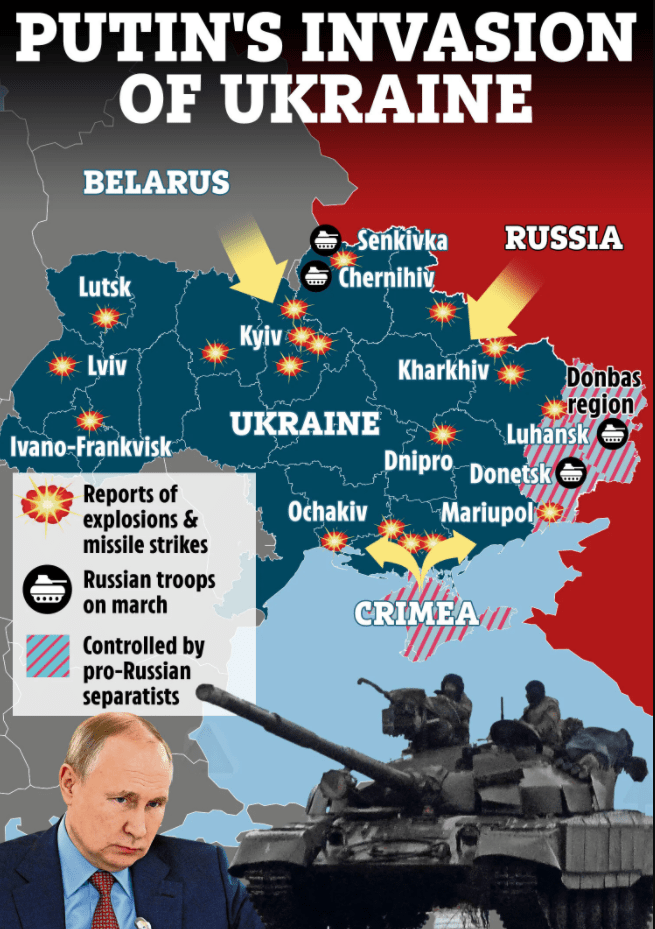 It reportedly crashed down into a residential building and set it on fire.

“According to operative information, the enemy aircraft was shot down by the Ukrainian Air Defence Forces and crashed in Darnytskyi district,” adviser Anton Gerashchenko said.

He also shared a series of photos of a nine-storey block of flats on fire to his Telegram account.

“Attacks on Kyiv by cruise or ballistic missiles have just continued,” he wrote.

President Volodymyr Zelenskyyy has begged global leaders for more sanctions on Russia and for defense assistance from the West.

He said: “If you don’t help us now, if you fail to offer a powerful assistance to Ukraine, tomorrow the war will knock on your door.”

The Russian invasion began early on Thursday morning with a barrage of missile strikes on cities and military bases, before troops rolled in from three sides of the country.

Ukrainian officials said they lost control of the Chernobyl nuclear power plant – and civilians across the country have piled into trains and cars to flee.

Defence Secretary Ben Wallace said Vladimir Putin has been “set on” a Ukraine invasion for more than a year.

He told Sky News: “Putin has been set on this for many, many months, certainly over a year.”

Mr Wallace said it appeared the West’s diplomatic efforts “didn’t matter” as Putin’s plan had always been about “greed” and wanting to “land grab”.

He said he believed the Russian leader – much like Hitler – had a plan to invade all along and the talks were a “straw man attempt to buy time”.

A damaged residential building at Koshytsa Street, a suburb of Kyiv[/caption]