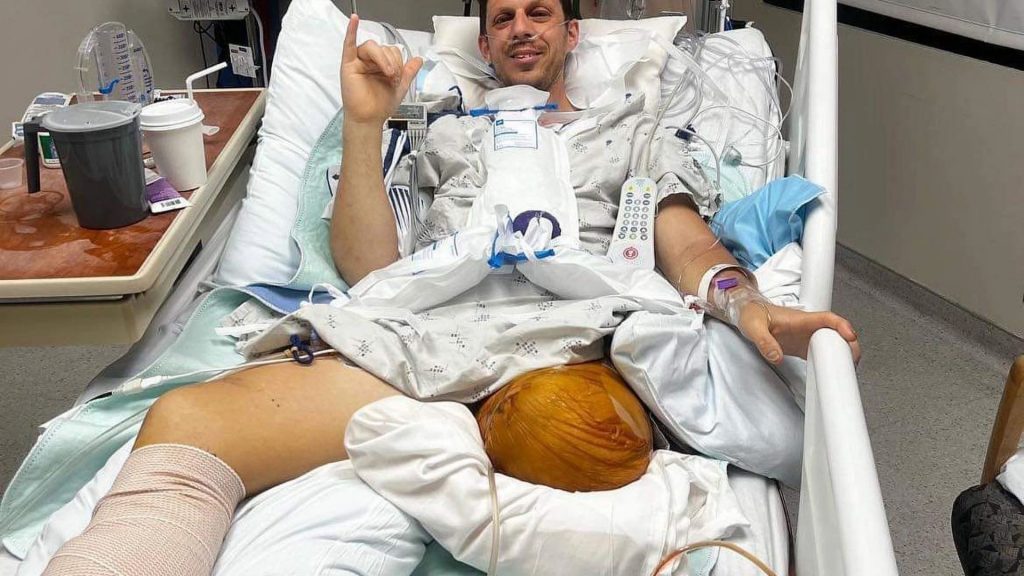 A HERO dad lost both his legs after throwing himself into the path of a moving snowplough to save his kids.

Quick-thinking Dave Miln saw the vehicle heading straight for his daughters Isla, three, and Anna, one, while on their way to lessons at a California ski resort.

Without hesitating, he hurled himself in front of the girls and was sucked into the machinery.

Anna survived unscathed and although Isla broke both legs, she is expected to make a full recovery.

The family – Dave, wife Clare and their daughters – had been living in San Diego, California, USA but have now returned home to Australia.

Isla was quickly transported to hospital after the horror accident at Mammoth Mountain resort last month.

But Dave was more seriously injured and left stuck in the machine until rescuers could free him and rush him to hospital.

It is understood he was conscious the whole time.

As well as losing both legs, he broke both femurs, his pelvis, a number of his lower vertebrae, a sacral vertebra and finally three ribs.

According to a GoFundMe page set up to help the dad, he underwent “ten different surgeries in three weeks and still has many more surgeries expected”.

The page adds: “Many will be happy to know Dave still maintains his dark sense of humor and razor-sharp wit.

“Dave has been medically transferred to Sydney but is still admitted in hospital.

“Clare, Isla and Anna are now back in Sydney where Isla is attending medical appointments several times a week. Together they will begin the long rehabilitation process both physically and mentally.

“This life changing incident means the Milns’ ‘California Dream’ has come to an early end.

“During this time Clare and Dave have shown strength and resilience beyond comprehension.”

So far, well-wishers have donated more than £60,000 to help towards Dave’s recovery costs.

The page adds: “There are many financial costs (some still unknown) involved for the Miln family to re-establish themselves in Sydney and for all the necessities Dave and the family will now need.

“These may include things like vehicle modifications for Dave, household equipment and modification and other bits and pieces that Dave will need in adapting to his disability.”