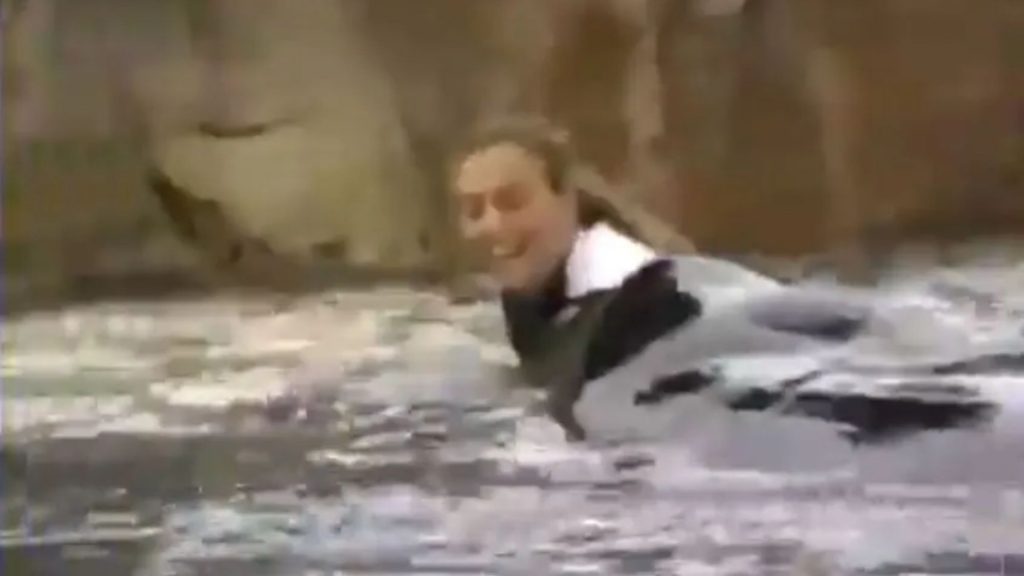 A SEAWORLD visitor recalled the terrifying moment she went to take a photo of an orca only to see a dead trainer in its mouth.

Dawn Brancheau was dragged into the water by her hair and brutally battered to death by notorious killer whale Tilikum.

Experts said six-ton Tilikum was made ‘psychotic’ by captivity[/caption]

The 40-year-old’s spinal cord was severed and she was scalped by the “psychotic” orca, which killed two other people during its 30 years in captivity.

Dawn’s death led to major changes at the parks – and now trainers do not get in the tanks with the orcas.

Haunting video taken in the minutes leading up to the tragedy shows Dawn performing with Tilikum – who weighed six tons and was 22ft long – in front of a crowd at SeaWorld.

Susanne De Wit, a tourist from the Netherlands, witnessed what unfolded and gave a statement to investigators.

After lunch at around 1.30pm she said went to a viewing area where she was told Tilikum would come for photo.

Susanne says she attended the “Lunch with Shamu” event referring to the stage name given by SeaWorld to multiple orcas.

On the day she visited, the show was performed by Tilikum but she refers to him as Shamu in the statement given to the Orange County Sheriff’s Office, which The Sun Online has seen.

“We saw Shamu at the window straight up,” she said.

“They told us he was playing with the trainer. Suddenly I saw Shamu grabbing the trainer by the shoulder and pulling her down in the water near the window.

“The tour guide pulled us out and there was a full alarm. We then saw them throw a net into the water.

“The whale was underneath. We didn’t see the trainer at this point.”

Susanne was also interviewed by a detective from the Sheriff’s office and the grisly details formed part of their report into Dawn’s death.

“Tilikum was holding the trainer by her shoulder and neck. Susanne De Wit could see the trainer’s legs.

“Tilikum was shaking the trainer and moving extremely fast.”

A timeline of events using video taken by another visitor shows Dawn’s “lifeless” body was seen in Tilikum’s mouth at around 1.43pm.

The time of death given on the Sheriff’s department report is “approximately” 1.37pm.

Dawn was an experienced trainer seen as a poster girl for SeaWorld and her shocking death ignited heated debates around whales in captivity and spurred changes to SeaWorld’s safety practices.

Her sister Debbie told The Sun Online animal lover Dawn was devoted to the whales she worked with and she is still trying to process her death.

Tilikum was torn away from his family in waters off the coast of Iceland in 1983 and put into a concrete holding tank at Hafnarfjördur Marine Zoo near Reykjavík.

After months spent swimming in circles, the orca was shipped off to Sealand of the Pacific in 1984.

In 1991, Tilikum was still cooped up at the Sealand park in Canada when a young part-time worker slipped and plunged into the pool.

He ferociously dragged her around the pool and stopping her from surfacing as the 21-year-old was heard saying “I don’t want to die”.

Staff frantically tried to throw her a life ring but she was unable to reach it as the whales treated her like a “plaything”.

In a terrifying ten-minute ordeal, Keltie managed to reach the surface twice as her haunting screams echoed around the pool.

When she came up for the third time, she had tragically drowned.

On the morning of July 6, 1999, horrified trainers found the body of a 27-year-old man over Tilikum’s back.

Daniel Dukes had visited SeaWorld the day before and stayed after the park closed – somehow escaping the watching eyes of security.

He entered Tilikum’s tank unclothed and by the next morning had been mauled to death.

SeaWorld said in a statement: “That tragic situation happened more than 12 years ago.

“Trainers have not been in the water training with killer whales for many years.

“We have extensive protocols and training in place to protect the safety of our trainers and animals.”

Dawn’s family said she cared deeply for all animals[/caption]

She is remembered for her beaming smile[/caption]